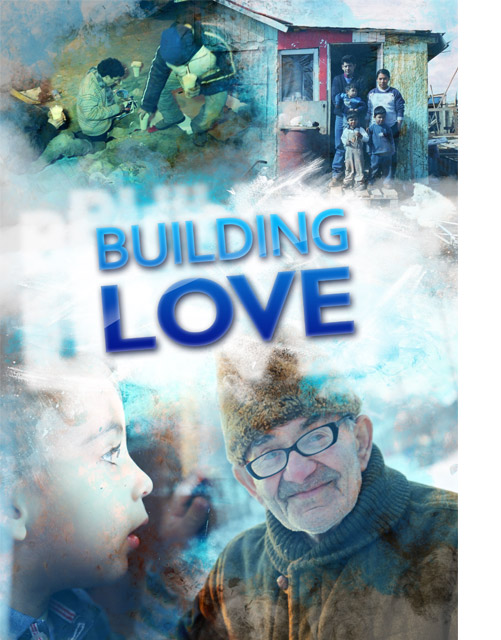 A travel to places where every day is a challenge to survive among people who spend their own life working for the others. Stories of self-denial and altruism, of suffering and faith, that will make you cry, smile, hope and think...
"Building Love" is a documentary series focused on the testimonies of humanitarian missions around the world, which were born with the desire to create something for the sake of others, in other words, to “build Love". From the hard work of psicologists and educators in Remand homes of Uruguay, to the extraordinary experience of Madre Ines, an eighty years-old nun who assists everyday 400 children affected by phisical and mental handicap, in Mexico. From the construction of hospitals and health centres for the poorest in Ethiopia, to missions against the criminal corruption ("mafia") in Italy and for the ecosystem protection in Ecuador. These are some of the real stories that we will tell you in this series, through the touching account of their protagonists. Ecuador, Romania, Italy, Mexico, Uruguay, Guatemala and Ethiopia are the countries involved in this journey.

Among the small "betuneros" of Quito...
In Quito (Ecuador), we meet Monica Silva that since 1999 has been guaranteeing, with her husband and other volunteers, a warm meal, educational and recreational activities to the small "betuneros" (shoeshiners) who live on the streets of the capital. As Marco, a young boy who has left the street and now works in a restaurant founded by Monica herself. We carried on to Ibarra, where the association "Cristo de la Calle", founded by Father Juan Francisco Santa Cruz. Its president Claudia and the other educators describe us their intense days in the service of the minors who are in situations of abandonment or domestic violence.

From the Natural Park of Rio Verde to Mano Amiga
In Rio Verde, Ecuador, we meet the landowners who joined togheter in the Zuñac Ecological Association to protect the ecosystem, promote the reforestation and the responsible tourism. Then we move on to Chone, where the passionate account of Father Juan takes us to the reality of Mano Amiga, a foundation which has been fighting for the protection and the integration of the natives since 1995. From the voice of the educators and of the beneficiaries, we understand the intense daily work aimed to educate and train young people by teaching them a concrete job.

When Mafia loses ground..
This journey took us to Sicily, a region of Italy which has been afflicted by Mafia crimes for centuries. Here we met people who have had the courage to fight the corruption, often even at the cost of their own lives. Such as the guys of Libera Terra, who have been using the lands confiscated to the mafia for years, by cultivating the fields, creating rural tourism and giving employment to hundreds of young people. Or as the journalist Pino Maniaci, editor of a small local TV station that courageously denounces injustice and illegality..

Parada: discovering “the other” Bucarest
In this episode we discover the varied world of Parada, an association working in Bucharest, Romania. It was born from the vision of the clown Miloud and, starting from teaching the circus art to the street children, it has developed a diversified activity which gives training and support to children and adults, most of all to the inhabitants of the "invisible" Bucharest... We follow the operators of the Mobile Unit during their nightly visits to the families that live in the sewers of the city. We see these people popping out from nowhere to have a little of food and feel the warmth of someone who finally do not ignore them as the rest of the people do...

"I will fight so that each of them has a future"
Silvia Saini, president of Children in Emergency association, opened us the door of the Center founded in Singureni (Romania) in the 90s by the Italian journalist Mino Damato. Here, thousands of orphans and HIV/AIDS patients have been hosted in the post-Soviet era. From the touching testimonies of Silvia and of the nuns of another foundation, the Caminul Francesco, we learn the degradation of the orphanages during the Soviet regime and the wounds that are still alive in Romanian society today. But most of all, we see the courage and the sacrifice of those who have fought and still fight to give a future to these children.

A light in the streets of Las Piedras and Montevideo
In this episode, the vibrant testimony of Father Mateo Mendez takes us into the heart of the Minga project. In Las Piedras (Uruguay), it offers an alternative to the many children we met along the streets, who are in a state of dumping and abandon. As Esteban, who after a childhood marked by drugs and the harsh rules of the street, was able to redeem himself. He began to study and now, having reached his majority, he is going to live in an apartment given to him by Minga.

Colonia Berro: A world of colors behind the bars
A new way of seeing and conceiving the juvenile prisons: the Ituzaingó Centre in Colonia Berro, opened to us the doors to a difficult and complex reality... the condition of the young minors condemned to serve a sentence, for having committed more or less serious crimes. Behind the bars, however, we found out an unexpected world, made of colors, solidarity and hope. A team of psychologists and educators live every day with these guys accompanying them in various activities, some of which are also held outside the building. The purpose is to give them the instruments to be integrated into society once they leave the prison. One of them, Gabriel, gave us his moving testimony.

Solidarity and hope among the 'Zoque' natives
This episode takes us to Mexico to meet two organizations that work to save children and indigenous culture from violence and marginalization. Vides Italia is managed by nuns who give 'Zoque' children and women the education and training they need to be integrated into society. We also meet up with former students who now work as volunteers in the association. While Cristina of Crecemos Dijo explains us how she found the strength to overcome the fear of working in one of the most dangerous area of Oaxaca. The result today are 3 centres and a school, which receive every day 300 children with their families.

The miracle of Mother Ines
The most touching association of this episode, is the family home directed by Mother Ines. A woman who has dedicated her entire life to host and treat children with severe psychomotor problems, who need of cures but that society has forgotten. Today, the eighty-years old nun takes care, by herself, of more than four hundred children, succeeding, thanks to her energy, in finding every day food and all the basic needs for these creatures, with whom she has created an incredible family.

A journey with the guys of Mojoca
A journey through the streets and the slums of the capital of Guatemala with the young volunteers of Mojoca. This group of guys tells us how they have created out of nothing an association that provides training and social reintegration of the street children. Hygiene education, talks to win the abstinence from drugs, literacy, course of cooking and carpentry: these are some of the activities that mark the day of Alfonso, Wendy and other young people who have chosen to dedicate their own life to helping their peers, through a relationship based on friendship, freedom and respect.

Alma de Colores: a future for Marinella's children
In this episode we talk about the extraordinary experience of Marinella Bacchio, who decided to move from Italy to San Juan de La Paz with her family to create the project Alma de Colores. Since then, she has been spending her days to coordinate kindergartens and training centers for the young natives, in particular for disabled ones. As Lencho, who thanks to the jobs he learned in the center, is about to realize his dream: "to buy a bed for her mom" ... Then we move to the beautiful village of Sololá. Here, since 1988, the Serjus association has been fighting to improve the living conditions of Mayan communities which ring the lake Atitlan, and to solve the problem of the environmental pollution.

“Ciedeg” and “Sulla strada”: working for the rebirth for Mayan communities
The protagonists of this episode are again the small Mayan communities, whose soul has been tragically marked by genocide and civil war. Among them, the community of Granadilla, where the only economical source is the fireworks manufacturing , made in precarious conditions and with child labour. Four or five- years-old children are forced to a exhausting and dangerous work, with very few chances of a different future. Here, thanks to the Italian NGO “Sulla Strada”, they can now study, play and dream of a better life.

Education and work are the hope of change
This episode leads us to Ethiopia, one of the poorest and martyred African country. In Soddo, the Capuchin Fathers try to improve the condition of absolute poverty by creating schools, like the “Arts and Trades School”, the only chance of redemption for many guys who thanks to it, now can help their own family and hope in a better future. Here, education is really the only true hope, and the Abba Pascal Girl's School is a proof of it. It is an all-girl school that, thanks to the efforts of a couple of Italian volunteers, Antonio and Lina, offers a future to Ethiopian women subjugated and enslaved for centuries.

A Butterfly bringing water and hope
A travel on the road in the remotest and barren Ethipian regions together with the Butterfly Foundation, which realizes wells and boundary schools. We arrive with the president Claudio Maneri and his daughter Coralie to the villages celebrating the new wells. Through their accounts we discover the backstage of each project and also a touching personal experience: the story of Claudio who, after his daughter's premature death, decided to create “Butterfly”, a symbol of transformation of pain into love to the poorest. We meet up also with Kidane, a young Ethiopian girl who, after many vicissitudes, can hope today in a better future thanks to Claudio who managed getting her operated in Italy, where our journey ends.